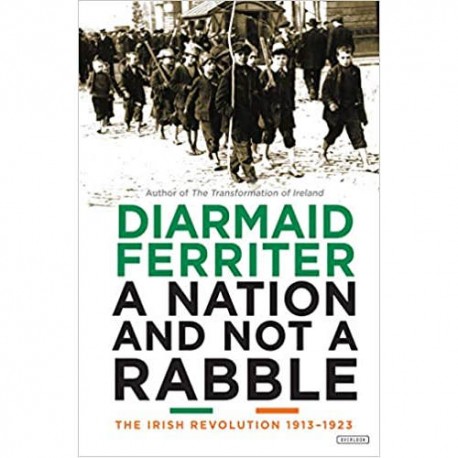 A Nation and Not A Rabble [SC]

By buying this product you can collect up to 12 loyalty points. Your cart will total 12 points that can be converted into a voucher of $0.60.

An arresting account of the Irish Revolutions and their legacy by a world leading Irish historian. Now available in paperback.

Packed with violence, political drama and social and cultural upheaval, the years 1913-1923 saw the emergence in Ireland of the Ulster Volunteer Force to resist Irish home rule and in response, the Irish Volunteers, who would later evolve into the IRA. World War One, the rise of Sinn Féin, intense Ulster unionism and conflict with Britain culminated in the Irish war of Independence, which ended with a compromise Treaty with Britain and then the enmities and drama of the Irish Civil War.

Drawing on an abundance of newly released archival material, witness statements and testimony from the ordinary Irish people who lived and fought through extraordinary times, A Nation and not a Rabble explores these revolutions. Diarmaid Ferriter highlights the gulf between rhetoric and reality in politics and violence, the role of women, the battle for material survival, the impact of key Irish unionist and republican leaders, as well as conflicts over health, land, religion, law and order, and welfare.