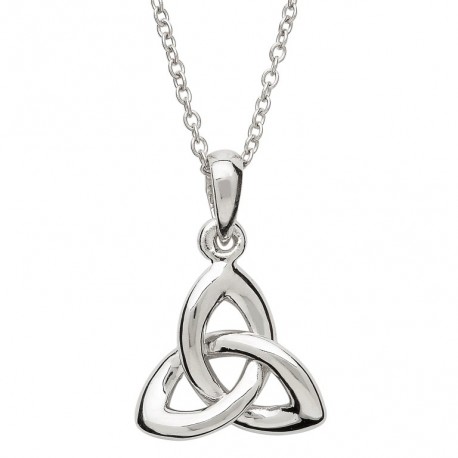 By buying this product you can collect up to 69 loyalty points. Your cart will total 69 points that can be converted into a voucher of $2.76.

The Trinity Knot is a Celtic symbol that symbolizes The Power of Three based on the three pointed ends of the image. Each of the points has a singular representation that also transforms into an interconnecting idea with the other two points. In Christian history the Trinity Knot represents The Father, The Son and The Holy Spirit. In some pagan explanations and spiritual explorations of the symbol's meaning the three points are emblematic of the air, water and earth. As the Trinity Knot has meaning in both Christian and Pagan beliefs, it is up to the wearer to determine its significance.

The Power of Three

While this beautifully crafted Trinity Knot necklace is a treasure to display, the wearer may keep it simple or dress up their wardrobe to show it off. It can be worn on its own as the pretty and chic fabrication allows, or with a favorite Shanore Trinity Knot earring set for a true extension of the Power of Three.